Home » Uncategorized » An Offensive Image of the Virgin Mary

An Offensive Image of the Virgin Mary 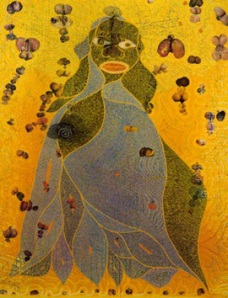 From the little I’ve read, I’m not 100% sure Chris Ofili was trying to cause offense with his 1996 collage, “Holy Virgin Mary.” At the very least, some have attempted to defend this work, which depicts the Mother of Jesus using paint, elephant dung, and photos of female buttocks and genitalia clipped from pornographic magazines. Ofili himself has suggested that the problem lies in the interpretation people put on this work, and not with the artist’s own interpretation. One art critic has even publicly apologized to Ofili for misjudging “Holy Virgin Mary.” Further reflection has led him to conclude that, far from being “graceless and silly,” the work is actually “an attempt to find spiritual meaning in a spiritless world.” Faith-and-culture writer Jonathan Merritt conceded that Christians are often too quick to condemn art they don’t fully understand. Upon learning that dung is often a symbol of fertility in African culture (Ofili’s parents are from Nigeria), he came to understand that “rather than defaming Mary, Ofili uses the dung to illustrate a certain sacredness.”

I don’t see it as necessarily anti-Catholic or anti-religion. I think there’s been a too-quick-to-flinch-and-too-slow-to-think response here. The British artist, whose parents are from Lagos, Nigeria, traveled to Zimbabwe and was awed by the natural wonders of the animal life that wandered through the lands of ancestors. He saw the earth as beautiful. He painted a black Madonna with a masklike face, like the objects of worship he must have seen. He painted a delicate lavender robe across her possibly pregnant stomach, and he exposed her breasts, as many tribal African women do. Her robe seems to be made of leaves; nature is around her and on her body. He then used elephant dung to mark her bare breast and to complete the design, as if rain were falling, as if the spores of nature were surrounding the lady…. He does not seem to be desecrating the Madonna-at least, thisis not desecration if one views the dung as part of nature, as a sign of life moving across the floor of the world. If the dung of the great and powerful elephant is simply read as a sign of animal life, of biology in nature, as part of the color of earth-not as our Western eyes see it, but as man might once have: the smell of a human body on the heath, bowels and digestion, heart and blood, all part of the process of life itself-then perhaps this dung is not slung against the Catholic Church and its worship of the Holy Virgin, but is used as a way to bring the African connection to animals, to nature, into the circle of the holy and the sacrosanct.

Be that as it may, the image is still offensive to some Christians—and not without reason. Siding with Ofili, art critic Michael Kimmelman concedes that “Ofili is playing with the ideas of blasphemy and worship, race and religion, toying in a gently ironic way with the space between public outrage and private expression to make his own spiritual statement.” Kimmelman performs a true service by letting Ofili himself explain that the dung has a double-edged function; it is supposed to be disturbing:

Ofili has said that “the paintings themselves are very delicate abstractions and I wanted to bring their beauty and decorativeness together with the ugliness” of the dung, so that people “can’t ever really feel comfortable with it.”

Many were obviously uncomfortable with “Holy Virgin Mary.” When the Brooklyn Museum of Art staged a show of Ofili’s work, then-mayor Rudy Giuliani threatened to strip the museum’s funding. “Holy Virgin Mary” was the principal reason. Cardinal John O’Connor called the show “an attack on religion itself,” and the William A. Donohue, the president of the Catholic League for Religious and Civil Rights called for concerned citizens to picket the museum.

And that—as far as I can determine—was the end of it. Picket the museum. Refuse to pay with your tax dollars for an exhibit you find personally offensive. Maybe even preach against it from your pulpit or on your blog. In other words, exercise your first-amendment right to protest something you find blasphemous, and do it loudly, angrily—and non-violently.

But don’t be surprised if far more people become exposed to the offensive material because of your efforts.

By Darrell Pursiful in Uncategorized on May 19, 2010.
← An Offensive Image of Jews Good Samaritans →