Google.org has launched a new initiative called the Endangered Languages Project. According to the website,

With the Endangered Languages Project, Google puts its technology at the service of the organizations and individuals working to confront the language endangerment by documenting, preserving and teaching them. Through this website, users can not only access the most up to date and comprehensive information on endangered languages as well as samples being provided by partners, but also play an active role in putting their languages online by submitting information or samples in the form of text, audio or video files. In addition, users will be able to share best practices and case studies through a knowledge sharing section and through joining relevant Google Groups.

This is a commendable goal that a language-junkie like myself can only applaud.

I found one slight problem, however. Exploring on their interactive map, I decided to zoom in on the United States to see what endangered languages might be spoken near me. There are no state boundaries on the map, but I believe the dot representing the Bezhta language is placed somewhere in north Georgia. 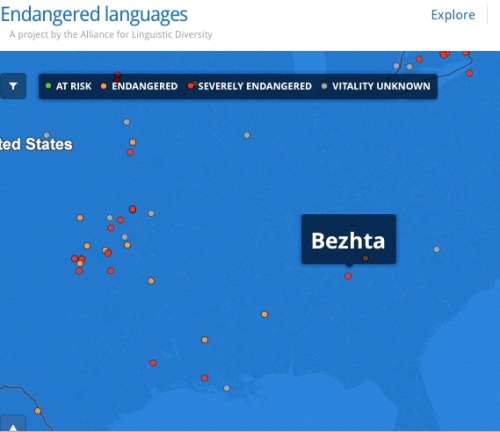 I had never heard of this language. Assuming it was a Native American dialect, I clicked for more information. This is what I found:

Caucasian language and it belongs to the Dido subgroup of the northwestern group (Avar-Ando-Dido) of the Dagestan languages. Bezhta is also called the Kapucha language, a name which originates in the Georgian name for the village of Bezhita. There is no scholarly agreement on the genealogical classification of the Bezhta (Kapucha) language. E. Bokarev considers it to belong to the Dido subgroup, whereas Georgian linguist, E. Lomatadze, thinks it is a dialect of the Kapucha-Hunzib language. Bezhta is divided into three dialects: Bezhta, Tljadali and Hochar-Hota. The vocabulary has been greatly affected by Avar and Georgian, through which there have also been some borrowings from Arabic, Turkish and Persian. During the Soviet era the biggest influence was Russian. (The Red Book of the Peoples of the Russian Empire) 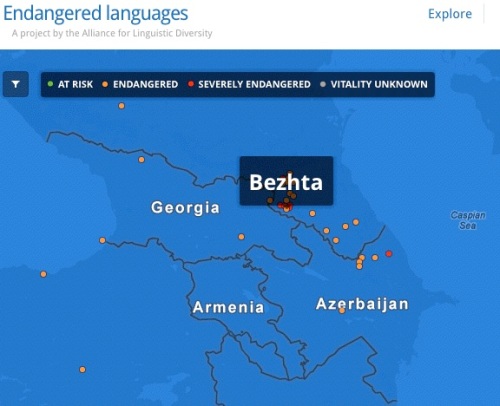 If there are, in fact, Bezhta-speakers hanging out somewhere between Rome and Chattanooga, I’d love to hear from you. Otherwise, I’m going to put this in the “somebody needs a geography lesson” file.

Thank you, Endangered Language Project, not only for the important work you’re undertaking, but also for providing me a much-needed chuckle today.

By Darrell Pursiful in Wealth of Egypt on June 21, 2012.
← The Gospel according to “Traditional Baptists” Divine Child Abuse? →